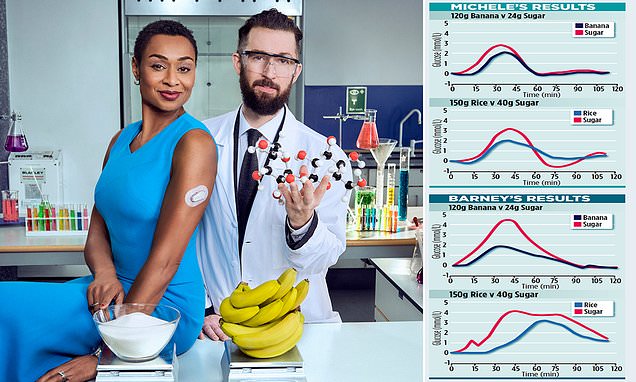 Is a banana as bad for type 2 diabetes as SIX spoons of sugar?

Barney Calman, pictured with former Olympic triple jumper Michelle Robinson ahead of testing the theory that carbohydrate in food broken down into single sugar molecules have the same impact on blood sugar levels.

Well not quite, cos there's things in bananas that aren't in Tate &Lyles - zinc is it or potassium? Trace elements indeed, but we might need em if we aren't getting them from elsewhere in our diet.

Not all that many folk have a BG meter tucked away with the Elastoplast and the Paracetamol, so portraying a spud as spoonfuls of sugar, is a very simple pictorial way of depicting the effect of eating carbs for those not intelligent enough to grasp the more scientific and fuller explanation.
Jenny
Type 1 since 1972, pumping Novorapid

Interesting to see this sort of thing appearing more and more in mainstream media.
Mike. Type 1 since 1991. Pump user since 2011, using NovoRapid in a Tandem TSlim (self-funded Dexcom G6 and Control IQ). HbA1c 47 (6.5%)
Blogging at: www.everydayupsanddowns.co.uk
I

To my eyes, the BG graphs show that the impact of Banana or Rice are such that they should be avoided even by pre-diabetics.

The idea that they would exactly replicate the graphs for those amounts of sugar is just ridiculous since those of us with a meter know that we all react to amounts of carbs and types of carbs differently. So how could anybody expect 2 random people to have exactly the same reaction to sugar as to a different carb?
Again, a banana or a quantity of rice will vary in ripeness or how it was cooked. Even so the concepts of GI and GL are accepted worldwide, so there is no reason for being fussy about converting these into the equivalent spoons of sugar concept.

This article is just an attack by a vegan doctor on the Low Carb / Keto movement.
Dr Richard Bernstein in the USA runs the Typeonegrit group has been on a low carb diet for decades as have many of that group. He is a Type 1 diabetic (diagnosed in 1946) and is approx 84yrs old and still working. There is less evidence to support a Vegan diet than there is for a Low Carb one, or a Keto one or even a Carnivore one, but many attack meat and dairy on religious grounds. 7th Day Adventists control the biggest grains company in Australia as are on the boards of most of the US and International dietary panels.
TOFI, T2D. Controlling Blood Glucose by LCHF and IF (and test, test, test)
March/April 2019 HbA1c 53
September 2019 HbA1C 45 (pre-diabetes) and -23lbs
May 2020 HbA1C 44 (pre-diabetes) and -2 more lbs.
I

Here is Dr David Unwin's reply to the Mail On Sunday article:

I have just seen that DiabetesUK's own Carbs and Calories book also compares Bananas and Rice to amounts of suger (in this case sugar lumps). Perhaps those Professors who object to Dr Unwin' teaspoons of sugar infographics would also object to that!
TOFI, T2D. Controlling Blood Glucose by LCHF and IF (and test, test, test)
March/April 2019 HbA1c 53
September 2019 HbA1C 45 (pre-diabetes) and -23lbs
May 2020 HbA1C 44 (pre-diabetes) and -2 more lbs.

Well teaspoons lumps or bags of sugar really have absolutely no meaning for me, other than the basic that a lump or a tsp is less than a 1kg bag of it, the only thing that does is comparing their respective grams of carbohydrate really.
Jenny
Type 1 since 1972, pumping Novorapid

Also it’s about balanced diets have a banana every now and then it’s simple
Phoebe
Type 1 - 15 years. NovoRapid and Lantus Solostar
Mum to one child

or if you are a type two using diet to control - stay right away from high carb foods and remain in normal numbers.
HbA1c still 42 at June 2019
weight loss is now 46lb
Doing very well on Low carb, feel thirty years younger.
Have joined a morris side, started teaching dancing to children, making the costumes and organizing folk festivals.
You must log in or register to reply here.
Top